Me. Fox FM radio hosts Fifi Box and Dave Thornton. Doubles legend Todd Woodbridge. A rope and $5,000. A game of Cluedo doesn’t get much more interesting than this.

In 2012, after two decades of playing tennis, a dicky knee forced me into an early retirement. I hung up the sweat bands and filed away the old tennis racquet as moths savaged my Adidas dress.

Little did I know I would re-emerge three years later for one more bash at the big time.

I’d entered a radio competition on Sunday. Several days later I found myself at the Tennis Centre umbilically attached to Fifi Box. The stakes were high: play a game of doubles against the Davids (Dave Thornton and radio listener Dave from Croydon) whilst tied up to blonde bombshell Fifi. Best of three games. Winner takes $5,000. 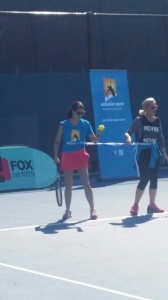 With Todd Woodbridge umpiring from the high chair, I was poised to serve for the first point.

In the past, my serves had been pedestrian at best but something came over me that morning at Melbourne Park. Possessed by my spirit guide Lleyton Hewitt, I served like I meant it. They went bang! And pow! And by God they were going into the right box. So what if I elbowed Fifi in the head a few times? Spurred on, Fifi and I scampered around the court like a nimble and symbiotic ferret. We went right, we went left, but most importantly, we went together. This was some serious synergy.

We won the first game easily. The Davids looked bamboozled. ‘Just call me Kelly-Bjorn Eng!’ I cried. I think I even pointed my duck-bill shaped hand at my face and shouted ‘C’monnnnnnnnnn’, whilst throwing in a few celebratory high kicks. The money was mine, all mine. Cue evil laugh and rubbing of hands. I imagined a new sofa. A trip overseas. And as many BBQ shapes as I could buy.

With dollar signs in my eyes, we changed ends. New balls please. And then something came over me. Veterans of the game call them ‘the gremlins’. After one wobbly return of serve I started to doubt myself. Were my arms capable? Were my arms attached to my body? Who was I really? I dumped another limp forehand into the net. At this stage Fifi was considering tethering herself to the net post as I was fast turning this game into crapaggedon.

It came down to the third and deciding game. Terrified I could barely spell tennis let alone play it, we faced the Davids’ monster serves. The balls flew around us like bullets while Fifi and I screamed in terror at their ferocity (though not their accuracy).

What a claw-biter of a match. At deuce, Todd Woodbridge announced that this was the deciding point. Davids served, Fifi hit back a magnificent return, then Davids cunningly hit a ball deep into the court. Fifi and I scrambled, thwacked each other with our swords and fell into a heap. Game – and $5,000 – over. Goodbye sofa. Ho hum.

Fighting the urge the sink to my knees and shout ‘My Lleyton, my Lleyton, why hast thou forsaken me?!’, I told myself that tennis was the winner that day. And weren’t the Davids worthy opponents. And who needed possessions anyways. In fact, I was all set to join an ashram.

Who said losers never prosper? (No one, actually.)

Footage of the happy day: http://www.fox.com.au/shows/fifi-dave/videos/fifi–daves-tethered-tennis/ 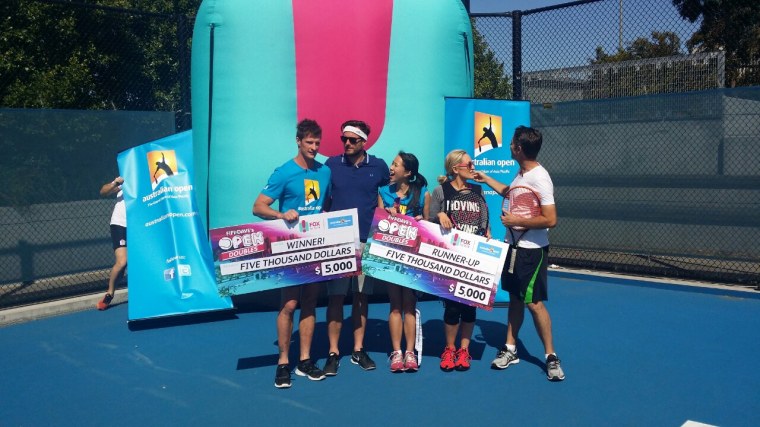 Dave from Croydon and I meet Woodie Toddbridge 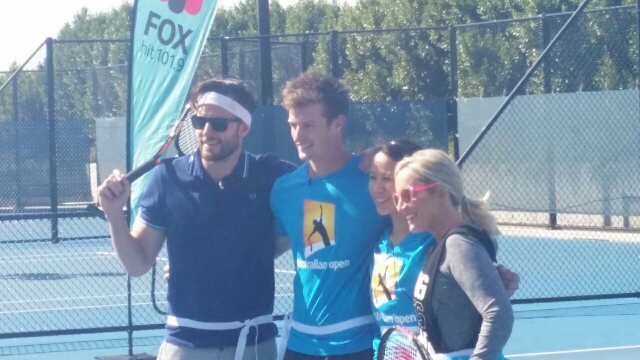 Winners (and losers) are grinners 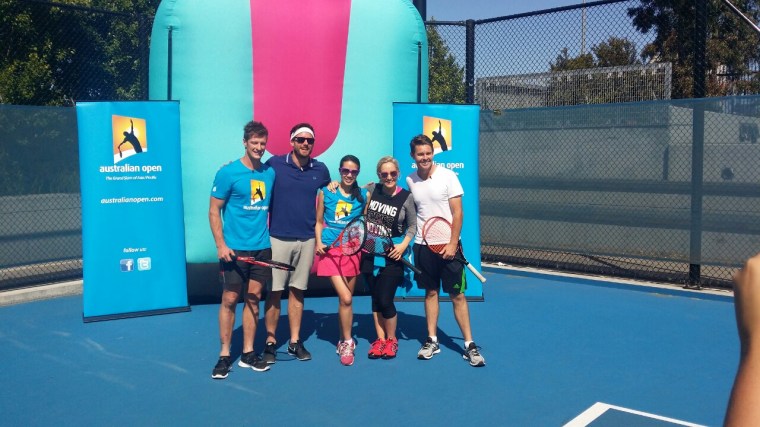 Smile for the marketing team!!! 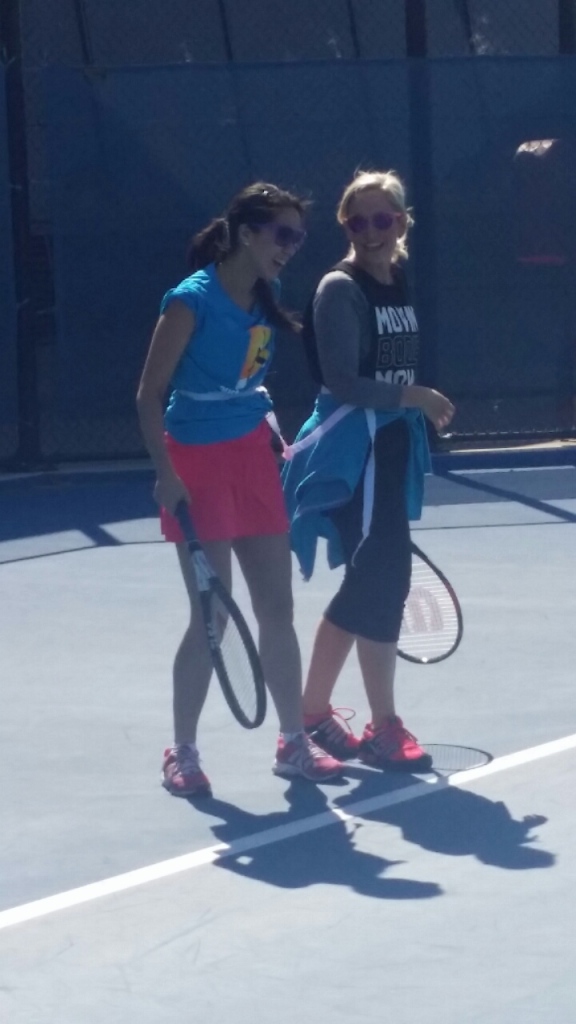 4 thoughts on “On tennis and bondage”