When I was small, Dad used to do the occasional international work trip.

He was unimpressed with most places that weren’t Glen Waverley (his take on Germany was that eating too many sausages gives you pimples); however, one place he was impressed with was Japan.

Here is Dad in the mid-eighties (note the enormous helmet of hair) looking right at home at a karaoke session in downtown Tokyo. He claims he was singing ‘Twinkle twinkle little star’. I suspect he was rocking out to Billy Joel’s ‘Just the way you are’.

Dad Eng – For those about to rock, we salute you 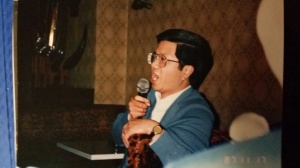 Dad used to bring my brother and I little plane treats. To an 8-year-old and an 11-year-old, a vacuum packed slice of Bega cheese and a three pack of water crackers was the culinary zenith. Very little has changed on that front.

Aside from plane food, I used to nag Dad for one more thing:  I wanted him to wind down the plane window and catch some clouds in jar.

Why he never did this we’ll never know. 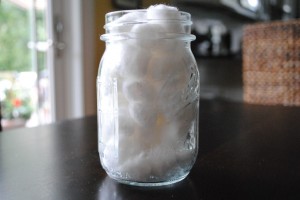