Yesterday, on my lunch break, I walked by a blind man. The man was calling out ‘hello, hello?!’ and so I did the civic thing and asked if he needed help.

He did. His seeing eye dog, Fischer, was malfunctioning. Fischer seemed to have forgotten his position description and was busy sniffing leaves, chasing his tail and being the crappiest guide dog of all time.

His owner, Tim, needed to get to Melbourne Central station but Fischer needed to do a poo. Apparently when Fischer needed to poo he lost all sense of direction. And so Tim asked if I could take them to the station. I agreed. He grabbed my arm and off we trotted dragging a reluctant Fischer behind us.

It’s not often you see a blind person guiding their own guide dog.

Tim then decided that we needed to encourage Fischer to do a poo before they got on the train. I thought a tree and some grass might loosen Fisher’s bowels so we pulled him to the lawns of the state library. I cooed my best dog-do-a-poo words of encouragement, but alas no luck.

We set off again and, as we made it inside the Melbourne Central Shopping Centre, Fischer stopped and started to do that weird hunched over thing that dogs do when they’re about to go. 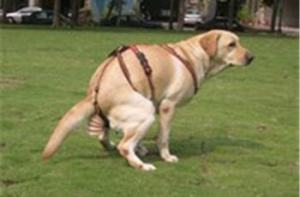 And so Fischer defecated in front of the Seafolly swimwear shop. Apparently grass didn’t inspire his bowels, but a two-piece fuschia bathing suit did. Fischer did not one, not two, but three enormous doggy turds smack in the middle of the shopping centre thoroughfare. They glistened and steamed under the fluorescent lights.

Oh dear, I thought. How is this blind man going to pick this up?

He reached into his pocket and found a small and inadequate plastic bag. “Here you go, Kelly – thanks.” I looked around for help. I saw a group of people sniggering at me. Fuck me. There was nothing left to do but reach down and pick the turds up. They were hot, soft and malleable in my hand. It was then I realised the plastic bag had a hole and some of Fischer’s turds had squelched through onto my hand. This couldn’t be happening.

It was an extra long walk to the station guiding Tim, Fischer and my hand to platform 4. I informed Tim that his train was 6 minutes away and bade him a good afternoon. 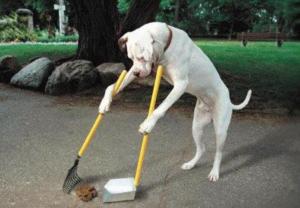 What I wished had happened