This year I was lucky enough to interview Santa Claus for SBS Food.

And boy has he changed. Santa has slimmed down and he’s a lean, mean (clean eating) athletic machine.

Read all about his new hair do, his love of chia seeds and how he controls the elves and their social media use. Not easy.

Thank you for your time today, Mr Claus. Ho! Call me Nick. And excuse me for nibbling. Six back-to-back interviews and I’m famished. Fancy a goji bliss ball?

Thank you but no thank you. May I say you’re looking sharp. The beard’s gone, you’ve trimmed down considerably …What’s the reason for the transformation, Nick? Look, I used to smash mince pies and shortbread like it was nobody’s business. But these days… Not many folk realise that my job is like an ultra marathon. If I’m not in peak condition, I’m not going to make the distance.

How much weight have you lost? I’ve lost 18 cm from my girth, and let me tell you it’s not bloody easy in these temperatures. All I want to do is snuggle up to Mrs C on the couch with a DVD and a family-sized bag of Doritos.

What’s your favourite DVD? Elf of course — it’s a hoot! I recently screened Lady and the Tramp for the elves. They went ballistic in the spaghetti kiss scene. We had to take the keg of red cordial away.

Speaking of the team, how is everyone coping at this crucial time? Quietly confident, but there have been a few setbacks this year. Reginald — sorry: Prancer; I have to remember to use their stage names — tore a hammy doing hill sprints. He’s healing nicely now, but for a few days it was muscle spasms on any cold surface.

And Rudolph? Certain rumours have— That’s all they are — rumours! I’m holding lab reports that state no injection of peptides. End of story.

Right…I appreciate it’s a hugely tough job that we barely know the half of. How’s Mrs C doing? Mrs C — Sandra, to us — is our rock. She knows every elf by name, shoe size and breakfast egg preference. They all go to her if they have any problems.

What kind of problems might they have? Look, the job is highly stressful with long periods away from family. In order to boost elven morale we’ve introduced short courses in zumba and cupcake decoration. We also had some issues with social media this year.

Really? Mmmm. One of the elves hacked into another’s Facebook account and posted inappropriate photos. We make sure they have better passwords now. Two-thirds of them had ‘sugarsugarsugar!’ or, ahem, ‘santasucks’ which made them easy targets.

Can you describe what it’s like on the big day? I’m usually too nervous to sleep and spend the night meditating. After breakfast — chia seed porridge with acai berry compote — we’ll go through our sun salutations while my chief elf triple checks the sleigh and GPS. Prior to lift-off, the head elves form a guard of honour with their candy canes, then it’s blast off.

Given your strict diet how do you feel about having milk and cookies? I have to be honest: I’m lactose intolerant so milk’s out and while I do like a good cookie, I have to fuel properly to go the distance. We pack bento boxes with chicken breast, broccoli and tri-coloured quinoa, though Vixen is obsessed with hard-boiled eggs and protein shakes. He gets quite gassy and the other reindeers refuse to fly behind him.

Any other horror stories from the frontline? Hah! Just a few. Hurricanes, locust plagues, a close encounter with a plane…

What do you guys do to celebrate Christmas? We debrief, the reindeer get rub downs and it’s free time for the elves. We have a huge New Year’s Eve party to compensate. This year it’ll be a stand up cocktail event and Mrs Claus has already planned the menu. I’m hanging for the pulled caribou sliders.

The elves always put on a stage show. Last year they did Grease on Ice — an arena spectacular. Seeing 800-odd elves singing “We go together like rama lama lama ke ding a de dinga a dong” was something else. 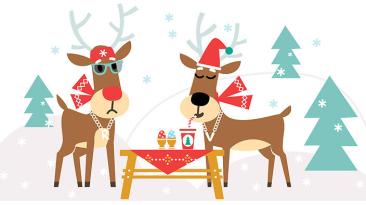