When I was 15 I grew a terrible pimple on my nose.

It was everything an awkward teenage girl didn’t want in the centre of her face. It was BIG, wide, red, angry and tenacious.

Another one grew near it. Not quite as prominent as the last, but still noticeable. Then something terrible happened. The Gods must have decided I had been bad, or maybe I had been some tyrannical despotic paedophile in my former life, because the two pimples merged to create one giant, mother f*cker of a pulsating godzilla pimpleS.

I could see the pimpleS in my peripheral vision. My brother called me Rudolph. When conversing, nobody could look me in the eye (well, it was essentially like a third eye). PimpleS were hypnotic; they practically had hair, teeth and a heartbeat. I remember one fellow student was unable to contain his awe: “Is that a PIMPLE?!”

Short of amputation, I tried everything to fix it: firebombing it with tea tree oil, injecting Clearasil directly into the crime scene, praying to my dermatologist…I thought of temporarily becoming Muslim or a beekeeper or living at the bottom of the opera house with my organ and memories of Christine.

This flashback was brought to you by my partner’s brother’s recent nose piece. I love it – what a corker. 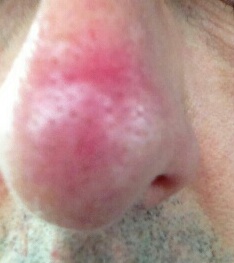